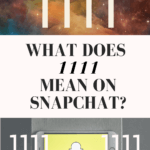 I’ve seen it many times in the past myself and wondered what it could possibly mean — and if it meant the same thing for everyone. I felt like I was being left out of some kind of cool gang.

Maybe it’s gotten to the point where you’re using 1111 yourself in your snapchats and you don’t even know why! You’ve just seen so many other people using it that you’re just going with the flow by including it now and again.

Well, if you want to know what it might mean, it turns out that it kinda means a whole bunch of different things so stick with me…

Oh, and before we dive in – did you know that some of the people including 1111 in their snapchats might not really know what it means themselves? Yep, that might sound a bit crazy but it’s mostly true.

So, yeah, no one seems to truly know what it really means because there is no one single meaning for it.

And like most trends, it’ll probably pass within the couple of years. So, if you’re sick of seeing it all the time, don’t worry – it definitely won’t be around forever!

You probably started seeing 1111 all over Snapchat a good while back and kinda amazingly, it’s still around today (at the time of writing, which is 2020).

The trend doesn’t seem to be fading for now. I think it’s going be with us for a while longer so I decided to write this article to address what it might mean after doing some digging online.

It’s Associated With a Spiritual Awakening

In a nutshell, a spiritual awakening is essentially a period in one’s life whereby they experience a series of realisations about themselves and the Universe. Most spiritually inclined people believe that they are spiritual beings (Souls) having a temporary human experience. More details on what it is here.

Many people started experiencing spiritual awakenings around 2011 (I was one of them), although many wen through them before that and many more will continue to do so going forward.

So, when someone who considers themselves a part of the New Age movement uses it on Snapchat, depending on the subject matter of the video, they might be signifying that they’re going through a spiritual awakening.

In the New Age movement, the number 1111 holds great meaning.

Seeing or including 1111 in snapchat posts is most likely conveying the sender or receiver of the message is acknowledging that they are going through a spiritual awakening.

I’m about to contradict myself here but 1111 has These people DO actually know what it means. The number 1111 is commonly known in the New Age movement as being the most common awakening symbol or code.

However, not everyone who includes it in their Snapchats necessarily identifies as spiritual.

Essentially, 1111 will mean very different things to different people and I go through those meanings below.

Other Reasons For 1111 Appearing on Snapchat

You might have been seeing 1111 constantly on Snapchat and you might have even grown to hate it, but it’s here — and below is what it might mean for you.

Lots of young people are including 1111 in their snaps because for some of them, it’s like sending a friend or someone they care about the opportunity of making a wish.

From what I gather, it should be looked upon as a kind gesture. Kind of like a little gift. It’s totally free so I guess the people doing it just think “Well, why not?!”.

When you see 1111 next time around in a snap, you might just want to make a wish anyway! To do that, state what that wish is, briefly close your eyes and see yourself living out that wish as if it’s happening right now. You never know, it might just come true!

2. Proudly Highlighting a Boyfriend or Girlfriend

Some people say: “She / he is my 1111” in their snaps. This is basically like saying that someone’s boyfriend or girlfriend means a lot to them. It’s almost like saying “you’re my everything”. Again, it can be seen as a rather sweet and kind gesture.

I definitely wouldn’t read too much into it. As you can see from above, it can mean a few different things to different people and I strongly suspect that even some of the people using it don’t know what it means. They just know it’s trendy to use right now and want to be in with the crowd.

Personally, I predict that it’ll be over within the next couple of years.

I hope that helped you figure out what seeing 1111 might mean on Snapchat. Hopefully something resonates with you as being true up there.

So that’s a wrap.

If you know someone who hates seeing 1111 all the time on your Snapchat messages, use it and make their day! Happy snap chatting!