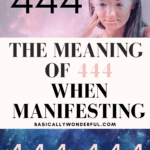 Plenty of people see 444 all the time but what does it mean if you see it while you’re working with the Law of Attraction?

Before we go any further, it’s important to mention what the energy of the number 4 represents in numerology.

So in summary, here are some of the most relevant energies it resonates with:

Seeing repeating 4s after placing an order with the Universe and visualizing your desire can mean a few slightly different things, however, ultimately, for most people, it will mean that your manifestation has been heard, received, and is being formed in the infinite field of potentiality that is Spirit.

In all likelihood, it’s just letting you know that everything is OK and to have confidence that it’s already done and at the divine right time, it’ll happen. Just relax to allow it in and avoid any contradicting thoughts which can prevent the desire from forming in physical reality.

RELATED: Noticing 555 When Working With The Law of Attraction?

OK. Let’s dive in and explore what it could mean for you. Bear in mind that more than one of the following points may be relevant to you.

Don’t worry — everything will work out

So as mentioned above, 444 usually indicates that everything is OK and not to worry.

Your Higher Self is letting you know that you can just relax, sit back and not worry about your manifestation happening.

Remember that the Ego mind can really interfere with the creation process. If you’re worrying about whether or not it’ll happen, you’ll just create more worry about it not happening, and it’s more unlikely to happen.

Rest assured that it’s on it’s way and that everything is perfect. Sometimes, manifestations can appear when we least expect them and when we’ve even forgotten about them entirely.

You’re heading in the right direction

You’re on the right path. You’re in the small percentile of people who know about the Law of Attraction and can actually, consciously create amazing things. You know that reality is almost just as malleable as it is in the dream realm.

If you’re manifesting something that requires a great deal of time and effort to come to fruition, such as a successful new business, whatever type of business that may be, it’s very likely going to require work but you’re doing it, and success will be yours in divine right timing.

If you’re manifesting something that doesn’t necessarily require a huge amount of work like a substantial lottery win (like Cynthia Stafford), (which is also perfectly fine), you’re also moving in the right direction by visualizing that you already have it.

Maybe you’ve also been thinking about what you’ll do if it doesn’t ever happen at all. And that thought might understandably fill you with feelings like fear, anxiety and dread.

Such thoughts of self doubt, while natural (or down to the way many of us have been raised) contradict the vibration of already having your desire and therefore push it away.

Your angels may be trying to comfort you by letting you know that everything will turn out OK in the end one way or another. Everything is always perfect, even if it doesn’t seem like it on a human level.

If you don’t manifest it now, you will in the future

One way or another, your Soul is always safe and your angels and guides are with you literally 24/7. You can call on them for help anytime if you need it. That’s what they’re there for and they’d be thrilled to hear you asking for their assistance.

They can help you out with anything that you need. As long as it’s coming from a good place, they’ll help to make it happen. But you must ask them expressly for their help. If you don’t, they are bound by divine law and they can’t intervene in your life at all.

Remember that you can call on loved ones who are in Spirit for help too. A beloved grandparent, for example, may be able to help you find a suitable new job, an awesome new partner or even help you out in your current relationship.

You’re being guided onto the right path

You might not be quite on the right path to allow your manifestation to happen just yet.

The number 4 resonates strongly with the Angelic realm, the Angels and Archangels.

If you’re seeing this number, it could be that you’re being gently guided through inspiration to be in a place where you can receive your desire.

Angels can’t intervene unless we ask them too, so they would only ever apply if you asked for your angels to assist with the success of your manifestation.

You’re waking up to your manifestation abilities

Maybe you’re a seasoned manifestor or maybe you’re just starting out and this is the very first thing that you’re manifesting.

Either way, you’re being guided to recognize that you are a powerful manifestor. One of the main reasons Souls incarnate on Earth is to become great manifestors.

When we move into alignment with the energy of manifesting (or deliberate creation as some also call it), we start waking up to the true reality of who we are and what we came here to do which includes loving each other and creating beautiful lives for ourselves and others.

Whether it’s creating abundance, various life experiences, a mutually fulfilling romantic relationship and so on, know that you’re perfectly able to do it with the right mindset.

You’re making great progress. Thought is what creates worlds, people and it’s what created the Universe and Multiverse. Maybe you’re waking up to this knowledge and you’re confident in your ability to create whatever you desire.

If so, seeing repeating 4s may just be a message of congratulations from your angels, plus some reassurance that your manifestation is complete and ready to appear in your physical reality at the right time.

It might be time for a subconscious clear out

Clearing out any subconscious beliefs and emotions holding them in place might be just what you need right now. Limiting beliefs can be major hindrances when manifesting. Even if this isn’t what is being communicated to you, it certainly won’t do any harm. The famous spiritual Biologist, Bruce Lipton has a great list of methods for reprogramming the subconscious mind of limiting beliefs on his website.

You manifested this number

The vast majority of people seeing repeating 4s over and over won’t be thinking about the number 4 or intend to see it as an indicator of manifestation progress, success or anything else.

If you’ve by any chance been thinking about the number 4, however, you may have manifested it. Maybe a colleague at work mentioned how it was their lucky number or someone won an amount of money with many 4s in it such as $44,000 and it stuck in your mind a little.

What you focus on expands so you’ll see and experience more of what you’ve been recently thinking about, day dreaming about or visualizing.

I would definitely recommend not thinking about seeing any numbers at all so that the numbers that you need to see will pop into your reality at the right time and guide you in the most appropriate direction.

Manifesting is your birthright

We should all be deliberately creating (manifesting) new things, experiences and people all the time. We are divine creative beings, created by a divine creator in order to create!

We were designed to go out and experience all sorts of things, one another, and bring all things (good, bad and neutral) back to Creation for its own experience, learning and expansion. That’s the best way that I can voice my thoughts on the Law of Attraction and manifesting in human terms.

It might sound a little crazy if you’re relatively new to the Law of Attraction and I completely understand that, but we really were born to create. Manifestation is our birthright.

In fact, it’s said by some spiritual researchers, such as the late Dolores Cannon, that we don’t stop incarnating until we learn to manipulate energy(manifest) to a high degree.

So whatever it is that you want, pursue it with the  knowledge that you can have it because Creation wants to experience as much as possible through its creations (us!).

We certainly weren’t created for things like sitting in cramped, windowless offices our entire lives and have life pass us by. Every incarnation is precious so don’t doubt for a minute that with the right mindset, focus and work, that you can live your most fulfilling life.

What do you think the meaning of 444 is when working with the Law of Attraction? Let me know what you think it means for you in the comments below!

I hope the above article helped. Please feel free to share how this number impacted or inspired your manifestation process!

MORE: The Meaning of 444 and Money

MORE: What 333 Means for Your Finances