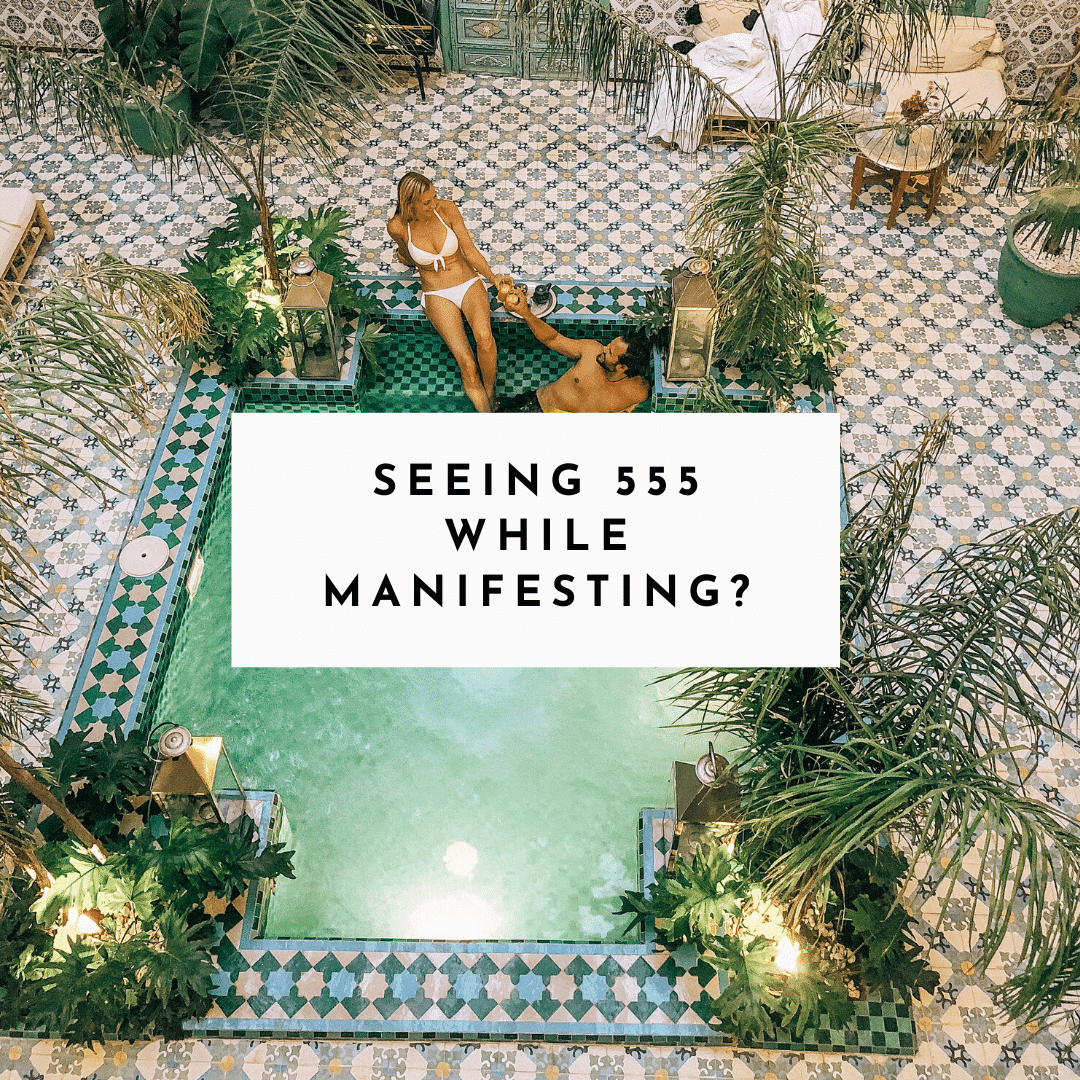 When I first sat down to write about the meaning of 555 when working with the Law of Attraction, I kind of struggled because 555 can indicate many things but essentially, more than anything, it’s indicative of imminent and significant change.

And well, that’s what you want when you’re manifesting something new and great into your life, right? You want to receive confirmation that your manifestation is en route, right?

Whether you’re manifesting a new set of friends, better health, a beautiful new home, an awesome new partner, by seeing 555 often, the Universe is telling you that it’s in the pipeline, baby! What more can I say?!

And yet, that isn’t necessarily the whole truth because, you see, although 5 is the number that usually indicates impending change, there are a number of other things that 555 can mean when you’re working with the Law of Attraction.

For starters, seeing number 5 can signify that some good changes are on their way into your life almost as much as some not so good changes. So this number may be advising you to prepare to receive your wonderful manifestation or to brace yourself for some tough times. These difficult times may be related to your manifestation or not.

But don’t sweat it because the majority of the time, 555 seems to be a simple heads-up to let you prepare to receive your cosmic order. Plus, as mentioned earlier, there are other things 555 can indicate when you’re manifesting something new. And as a side-note, manifesting is your birthright! It’s what you incarnated on this fine planet to do! We’re all creative beings designed to manifest stuff!

So, let’s begin by looking at all the various things the number 5 represents in numerology.

As you read on, see which explanation intuitively resonates with you because that will be the one for you.

RELATED: Yes, You Can Manifest a Specific Person!

RELATED: An Analysis of The Sagittarius Moon Man

RELATED: Why Do I Feel So Drawn to Amethyst?

Positive Meanings of The Number 5

The fiery and somewhat energetically quirky number 5 also relates to increased stability in life (think of a table with four legs plus one in the centre for additional support), independence, out-of-the-box thinking, lust for life, adventure, being on the move, creativity, intelligence, and courage.

Negative Meanings of The Number 5

Some of the less desirable meanings of the number 5 include stubbornness, restlessness, boredom, black and white thinking, laziness, poor decision making, competitiveness, and rigidity.

It relates to the astrological sign of Leo, which is a fixed, masculine, sign in the element of fire.

1. Take Action on Your Manifestation

As a fiery number, 5 may be calling you to take action on your manifestation to help with its fruition in your reality.

See it as already done and as if you’re living it in the present. As an example, if you’re manifesting a new job, send out as many CVs as possible each day. Take smart, affirmative action to step closer to the achievement of your goal.

This also tells the Universe that yes, this is what you want and you reopen to receiving the new perfect new position. I’d there’s a position that feels ideal to you, go for it! Visualise already working in that new role. If it doesn’t happen, then something better might be waiting for you.

As a real life example, I desired to become a blogger and I knew that if I wanted that career, I’d have to work often and methodically in order to create that in my life.

Remember that your vibration creates your reality. Your vibration is made up of your thoughts, your subconscious beliefs, and your feelings.

When manifesting something new, this is particularly crucial to remember. We can only manifest great things if we’re in energetic alignment with the vibration of the higher frequencies of receiving, gratitude, and harmony.

This could pertain to spiritual wisdom if you’re awakening spiritually, or general wisdom because thankfully, we tend to become smarter, calmer, and sharper as we age (or most of us do, anyway!).

You might currently be moving into a new phase of spiritual evolution that will allow your manifestation to appear in your life with greater ease.

Or maybe this is where you’re heading right now without even knowing it.

Your vibration may be rising as a perhaps somewhat unexpected result of:

5. You’re About to Take Action on Something New

You might be planning for a significant event or you may soon be experiencing one but you don’t know it yet!

For example, if you’re about to start traveling the world or move into a new home seeing 555 may provide confirmation that it’s right thing to be doing and this is perfect time to be doing it!

6. A New Relationship May Be Coming

You may have put out an intention for a new relationship and you’ve been visualising what it’ll be like to be with them. If so, seeing 555 often may very well be confirmation from above that your order has been received and is happily in progress.

And in divine timing, it’ll just happen — possibly when you least expect it!

So just relax, let go, and know that your divine selection will come into your life in divine timing.

And don’t be put off by a delay. Sometimes the perfect person for us might be going through a divorce, recovering from an illness or the loss of a loved one, globe trotting after graduating, or any number of other things!

But when the time is right for you both, it’ll just happen.

7. You’re About to Discover Your Life Purpose

You might be working on manifesting wealth and abundance and suddenly, a great idea for a new business pops into your head!

In that new business, you might hire staff and make a point of treating them fairly. You might be inclined to provide them with great pay and treat them with consideration. Running a business in such a fashion is a very enlightened way to live and do business.

Or perhaps it comes to your attention that you’re able to switch career paths and start working with animals or children.

8. It May Be An Ideal Time For Some Healing

Seeing this number often may also be a hint from the Universe or your angels that you could really benefit from some energy clearing. from this incarnation and previous incarnations.

This will then allow your manifestation to come to pass with much greater ease and possibly faster.

If we have limiting beliefs lodged in the subconscious which contradict the way we towards what we’re manifesting then it’s unlikely if not impossible that the manifestation will come to pass. Clearing out limiting beliefs should be number uno on any manifestors check list!

The well known Biologist, Bruce Lipton, often talks about Psych-K and how he’s able to clear limiting beliefs in seconds from his subconscious. I have found that getting hold of a practitioner in my area has been somewhat tricky (and I currently live in London, UK, one of the busiest cities in the world!). Saying that, if you’re in the US, perhaps you’ll find one nearby or in a neighbouring state as it’s more well known over there.

Sadly, you can’t carry out the procedure on yourself as far as I’m aware.  He does also mention other techniques to remove limiting beliefs in this blog post on his website.

My experienced energy healer also has a theory that unless you remove the emotions anchoring the belief in the subconscious mind, it will reform. So in order to get shot of it completely, you might also want to look into getting rid of those heavy subconscious emotions that caused the formation of the limiting belief in the first place, as well as the belief itself.

If this doesn’t resonate with you as being valuable, that’s totally fine and that will likely mean it isn’t needed at this time.

Maybe None of The Above Meanings Resonate With You

If none of the above suggestions for seeing 555 resonate with you, you can still easily find out what the Universe is trying to tell you.

Just find a quiet spot at home for a few minutes, relax, take a few deep breaths in and out, close your eyes and ask your Higher Self, your angels, or the Universe to communicate to you the meaning of the number you’ve been seeing. You can also ask to be shown what it may mean in relation to what you’re working on manifesting.

Unless you have aphantasia, which is uncommon, you should start to receive some mental images and other information that will lead you to the meaning behind the sighting of the number.

If you don’t really see images much, you might just suddenly know why you’ve been seeing it after asking to be shown the meaning of it.

Remember that your angels can’t help you in any way unless you give them your permission by asking them to. You can also create a better connection with them and receive clearer guidance and messages from them if you raise your vibration by engaging in ongoing inner healing work and opening your heart and third eye chakras to them.

I’ve been seeing repeating numbers for well over a decade now and so I have personal experience with many of them.

I know that for me, 555 means change and change only, however, a close spiritual friend of mine is adamant it indicates an increase in spiritual and psychic awareness. Ultimately, you have to decide what feels right for you and the meaning may change as you go through life or simply from situation to situation.

Remember that whatever you’re manifesting and whatever happens, it’ll be change that will always be for your highest good and Soul growth. Even if it seems inconvenient, disappointing, or plain bad at the time, the experience or event will still be positive as far as your Soul is concerned.

I know this can be extremely difficult to see at the time and if your manifestation doesn’t happen when you’d like it to, or you feel like it just won’t happen at all, it doesn’t mean that it won’t happen at all. It’s very likely to simply be coming and will happen in divine timing (which is so different to the human timing!).

Where have you been seeing 555 lately? On license plates, in YouTube view counts, door numbers, printed onto trashcans or some other, completely random and unlikely places? Let me know by commenting below!

MORE: What 444 Means When Working With The Law of Attraction

MORE: 6 Reasons Why Sodalite Should Be In Your Life

Hi, I’m Diana. If you’d like to learn more about yourself and others through Astrology or you’re wondering how to manifest better or what a repeating number means, you’re in the right place!