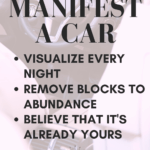 I understand; you’ve had the same old car for years on end and you want something better.

Or maybe you haven’t had a car in a while — or ever!

When I was in my early twenties, I had very little income yet I managed to manifest a beautiful second-hand silver Mercedes ML SUV. The interior was so comfy and lush, it was a delight to drive, the air con was amazing, and despite being almost a decade old already, it lasted a further 5 years.

It was the car that I had wanted since I was a kid. I promised myself that I would own it one day. And once I started practicing manifesting material things, I made it happen within a few months.

Here’s how you can attract whatever car you desire too— and it doesn’t have to be brand new; it can be a stunning vintage car!

It can be whatever car you want.

Decide exactly what car you want

If you don’t already know what car you want, find out! You’ll need to visualize yourself already experiencing the car so get online and pick one.

Spend some time around the car

Spending time in or near the car you desire can drastically help with your visualisation because it’ll be easier to picture in your third eye.

If you can, view your car at a dealership and take it for a test drive.

If someone you know owns the same car, ask them if you can take it out for a spin (if they’re insured for third parties to drive it!).

If neither of those are options because it’s an old model for example, find one being sold online and book a viewing with the individual or business selling it.

When you’re inside the car do the following:

Affirm to yourself that the car is now yours

Affirmations, when repeated with feeling and belief, can really help.

The goal of using affirmations is to program the subconscious mind to believe that something is already happening in your reality.

And in this instance, that’s a new car.

Here are just a handful of affirmations to incorporate into your morning or evening routine:

“I feel so incredibly blessed to finally have my new car”.

“Getting around is so much easier and enjoyable now with my new car, I love it!”.

“My new car looks amazing in my drive and I look forward to getting into it each morning!”.

“I am so thankful that I have my gorgeous car”.

“I really enjoy driving my gorgeous new car. I love the way it looks, how smooth the drive is, and the smell of the interior”.

“This car came to me so effortlessly and I just love how much easier it has made my life”.

When speaking affirmations out loud, you might want to look in the mirror. Some people think this helps the subconscious to more readily believe the statements.

Casually chat to yourself about your new car

Talking to yourself or pretending to talk to a friend (out loud) about your new car can also help!

It might seem a bit crazy to have an imaginary conversation but I have manifested a crazy amount of amazing things in my life by pretending to have conversations with my friends and family!

I’ll sometimes even sit in my kitchen or den and just talk to them as if they’re there for half an hour or more and I’ll fill the conversation with plenty of detail.

Visualization is the most powerful tool for successful manifestation.

It should be light-hearted, playful and fun.

Never visualize while feeling needy; this is where many people get stuck.

It seems to be a common belief in the law of attraction community that if you wish for something or someone and think about it or them enough, you’ll get it or them.

You need to convince your subconscious mind that you already have the car of your dreams.

Visualization is more about programming your own unconscious mind to believe that you’re already living with your new car. This causes your consciousness to move into the time stream aka timeline, where you have the car you desire.

When you’re in a chilled out state, such as just before bed or shortly after waking up.

Frequency and duration of visualization

You can visualize every night until your car pops into your reality. It takes quite a lot of visualization for the subconscious mind to believe something new so it might take a while and you will have to keep ongoing.

Fill your visualization with as much detail as you can.

Let go of it

Stop thinking about it.

Thinking about whatever you desire all the time can create resistance to receiving it.

You were made to create by an all-powerful creator. It’s your job to create whatever you desire! So know that manifesting anything is your birthright and should be an enjoyable, fun, and hopefully easy process.

The goal is to train the subconscious mind to believe that you have it mainly through visualization. And it’s actually when you aren’t thinking of it, that it is more likely to manifest.

So, continue going about your daily life and forget about it.

Let go of any negative emotions surrounding not having a car.

Not having a car or a car that you’re happy with is annoying at best. If you don’t presently have a car, you can’t easily get around to meet your friends, family, go on dates and go shopping, and so on. It’s easy to feel resentful and stressed about not having a car and maybe even a little jealous of others who do have cars — especially their dream cars!

As soon as you feel one of those emotions boiling up, pack it straight down. Remain confident that you have ordered your car, that your visualizations are programming your subconscious mind to believe you already have your car and that’s all that’s needed.

And, very importantly, don’t try to guess how it will come to be! Leave it up to the Universe to bring it to you. There are so many different ways it might pop up.

It happened in a rather unexpected way for me and I’ve come to understand that’s pretty common when working with the law of attraction! I knew exactly what car I wanted as I had desired to own this car since I was a kid but even second-hand, I couldn’t afford one that was working and in good condition.

So I began visualizing.

I visualized every evening for a few weeks and then once an evening, I stumbled across an auto trading website that I didn’t know about. I searched for the make and model of the car that I was after and saw a brand new listing for not only the exact make and model I wanted but also the color!

The car was listed way below market value and I could easily afford it! I was a little concerned that it was a scam but I immediately contacted the owner anyway. I guessed that it would be fine to just take a look at it with my partner at the time.

We saw the car and she explained that she needed to sell it quickly as she needed the money. She was honest and listed all of the minor issues the vehicle had and we took it out for a test drive. It was perfect — and exactly what I had been visualizing!

I paid her exactly what she wanted; I didn’t haggle as the price was low enough already and took it home. I was absolutely thrilled.

Before I started visualizing, I honestly thought that I would just be looking on used car websites for months until I found a dealership selling one. I had previously considered it way too risky to buy from some random individual but the Universe knew better and hooked me up with my dream car!

Get into the flow of prosperity

Start to feel abundant and that’s how you’ll get into the flow of prosperity.

We manifest what we are being rather than what we are doing so if you feel prosperous and like anything is possible, then you’ll attract more abundance and good things, in general, going forward.

You can get into alignment with prosperity by:

Removing any blocks to abundance

We all have blocks to abundance. They’re also called limiting beliefs or negative beliefs.

They were created when we were little by being told certain things like “money is scarce” or “you have to work hard to make money” by authority figures such as parents and teachers.

There are numerous ways to remove these blocks but it’s best to do it with a professional energy healer in my opinion. It should save you time because they should know what to look for and how to remove them successfully.

If you can, try to get a recommendation from someone you know.

Believe that your life is what you make it; that it is  changeable and malleable

Many spiritual people believe that this plane of existence is an extension of the spirit world and is therefore entirely malleable. I believe this to be true too.

If our reality is indeed malleable, then almost anything really is possible.

Know that if what you desire to manifest, whatever it is, is for your highest good and the highest good of everyone else involved then your desire will come to fruition.

I want to add that there is absolutely nothing that should be considered an unsuccessful manifestation.

This is for two reasons:

Abraham Hicks has said many times that people have no idea how much stuff they have “in escrow” or “in their vortex”, meaning there’s lots of potential there for things to manifest in the physical realm. And with the right amount of work, they can indeed happen.

47 shares
Previous Post: « The Ultimate Guide to Self Care for Scorpios
Next Post: How to Manifest Clear Skin »