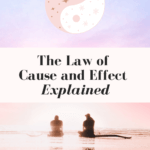 An eye for an eye. A tooth for a tooth. What goes around, comes around...

When we usually think of karma, we think of someone getting their comeuppance.

The thing is, though, is that isn’t exactly how it works. Let me explain why.

Karma, also known as the law of cause and effect is fundamentally, a spiritual learning tool

It isn’t a word to describe the Universe reaping revenge; the Universe isn’t remotely interested in spiting its precious inhabitants.

I understand that might sound surprising and even a bit disappointing but it really is just a very valuable tool.

Karma is essentially the experience of events, thoughts, feelings and so on from the perspective of another.

If it’s beneficial for the learning, experience, and healing of the individual who consciously did wrong by someone, they might choose to undergo the same or similar treatment in this incarnation or another incarnation for their own learning.

You see, Souls want to experience what it’s like to be on the receiving end of wrong-doings.

It helps them to gain wisdom and reach higher states of consciousness.

In a previous incarnation, a married person may have had multiple affairs and not thought much about how their actions impacted their loyal and loving partner.

Upon death, it’s said that we all go through a review of the lifetime that we just left.

We call this a ‘life review’.

During the life review, we experience the thoughts and emotions of the people we affected while we were incarnate.

Aside from feeling remorse, guilt and sadness during the review, the Soul might feel that it needs to explore the situation personally while incarnate.

So, in a subsequent lifetime, they might manifest events that lead them to marry someone who will be devious and disloyal.

And the aim would be to learn that being cheated on can be traumatic and greatly affect others in the family such as children and parents.

The Soul would probably aim to learn how to deal with the situation, recover and get on well with the rest of their life.

All Souls don’t learn at the same rate, however.

So although the aim might be to learn how painful it can be and move on from it, an individual affected by infidelity may become vengeful, obsessive and bitter, which would be understandable to humans, but not ideal for Soul growth.

Therefore, the same lesson or a similar lesson might need to be repeated over a number of lifetimes in order for learning to take place.

It’s also possible to experience karma while still alive. We attract what we are being rather than doing so if someone is a cheater, they might eventually attract a partner who is also a cheater and experience being cheated on.

Of course, there are thousands of reasons why someone might cheat or be cheated on but this is just an example of how karma might play out between two incarnate Souls.

The Wheel of Karma

I used the example of a cheating spouse above and I’ll use the same example again to illustrate how the wheel of karma works.

Over the course of many lifetimes, we often meet the same Souls and make the same mistakes with them.

After being the cheater in one lifetime, a Soul might choose to be cheated on by a spouse in another lifetime.

If they don’t learn something from the experience or they exact revenge without ever forgiving them, they might then choose to experience the lesson again and again until they learn to let go.

This will usually be with the same Soul in an almost endless cycle of cheating and being cheated on.

The karmic bond may only be broken when one or both of them learn something from the experience such as how to let go and cope.

As a side-note, even if the person being cheated on becomes livid upon discovering the truth, it doesn’t matter. As long as they learn something from the experience while incarnate, even if it’s decades later, the lesson has very likely been learned and the cycle has been broken.

Some of us learn to let go and forgive faster and easier than others and that’s okay. There’s no rush to learn how to forgive and ascend in awareness as we can incarnate as many times as we need to.

Understanding events from the perspective of other people in the life review is also particularly useful for the Souls who are working on becoming more conscious such as those who commit crimes without remorse (aka sociopaths or anti-social people) as it can help them to grow.

If you feel you have accumulated karma with someone, you might be excited to discover that you can release it without them being present or even alive.

And doing so won’t mean that you won’t meet that person again in this lifetime or another lifetime. It will just make your connection healthier, happier and smoother.

There are many spiritual tools and healing modalities that you can use to do this.

Speaking to an energy healer would be the best place to start as they can give you specialised advice and guidance.

How to Use Karma to Your Advantage

By being more understanding and forgiving, you’re not only helping others to lead easier lives but you’re also helping yourself in a the following ways:

When you vibrate at a higher level, you’re in vibrational alignment with higher vibrational energies.

This means that you’ll attract far better life experiences and that very much includes friends, partners, co-workers, bosses — even strangers!

Releasing karma means we’re letting go of lessons that we no longer need — we’ve passed them and we’re moving onto much bigger and better things!

More opportunities open up to us when we’re vibing high and life just runs a lot smoother.

When you find that it’s easier to let go of events, that’s a really strong sign that you’re on your way to attaining a higher level of awareness.

As we raise our awareness, we’re also preparing ourselves for the ‘New Earth’.

The New Earth is said to be located in the dimension just above the one we are presently located in.

Whether the New Earth is a literal or figurative place, it’s essentially a much better place than the Earth we reside on at this time.

Earth, also known as Gaia, is a living being itself. It’s ascending by raising its awareness just like we are.

Many people today believe that the Earth is literally moving into its next incarnation and no other planet in this particular Universe has ever done this.

We aren’t quite sure what to expect in the New Earth but we do know that it will be important for those who wish to move with it, to be a vibrational match for it and that means raising your vibration.

I believe that karma is very real. I have personally experienced it and I’ve witnessed it happening to others — as I’m sure you have too.

Sometimes karma comes around very quickly while the person is still alive and other times it seems like people die and ‘get away’ with doing terrible things to others.

If it’s needed for the wrong-doers’ spiritual growth, (and it usually seems to be), they will indeed experience their own previous actions themselves at some point while incarnate.

The goal for the Soul is to learn to overcome negative life events and learn something from them.

Many times, bad events have been pre-planned before incarnation to allow the Soul opportunities for growth, so karma isn’t always the cause of a bad life experience.

And karma isn’t a punishment but rather a tool for the Souls’ journey of learning and  growth.

The important thing to bear in mind is that we have all said and done unpleasant things in our past and present lifetimes but we are never thrown into hellfire for our actions; God is all knowing, all loving and created us to create good and bad things.

Ultimately, although it can be hard, learning to let go of negative events and release anger and fear can help us all to raise our awareness and vibration.

And by doing so, we can attract much better experiences and people into our present and future lives.