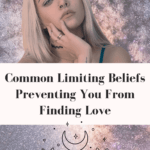 What are limiting beliefs?

For example, if you believe that you’re clumsy, or really bad at cooking, then you’re far more likely to demonstrate being clumsy or being a terrible cook.

There is no need or reason to hold onto any limiting beliefs because they aren’t the real you.

Are disempowering beliefs the same as limiting beliefs?

How to get rid of them

Once and for all.

You can do that by visiting an energy healer who uses healing modalities such as The Emotion Code. Bruce Lipton also has a long list of belief changing modalities on his website.

Ok, so without any further ado, here are some of the most common limiting beliefs around love that people have often picked up.

1. “All the good men / women are already taken”

Good natured people who enjoy relationships and have a lot to offer potential partners might be single for all kinds of reasons!

People of all ages are looking for love and granted, there will be many people settle down in their twenties and thirties usually but many don’t, or find themselves single again for the reasons mentioned above.

Just remember that you only need ONE compatible person for a partner so never mind about all the non-matches you’ve met so far!

2. “This is hopeless. I’ll never find anyone”

Scrolling through the feed of various dating apps…

Wowzers, the profiles of some people…

And the messages you often get show such a lack of self awareness, stability, and sanity!

Ok… I’ll stop myself there.

What I wanted to demonstrate was that I’ve been there! I’ll be the first person to raise my hand and admit that I used to hold this belief.

You might too. It doesn’t matter if you’ve had 10 longterm relationships, 1 or none previously, you’ll very likely find someone compatible if you’re open to meeting someone new and approach dating as just being something fun to do after work sometimes.

If all men or women were cheaters, no one would ever be happily married and I’m sure you know at least some people who are? Even if it’s just your parents, sibling, best friend, cousin or boss!

That sounds so hateful! But I totally get it. Yep. I went through this phase too — for YEARS.

I thought all men were just awful people. Then my male friends pointed out that I like them (as people) and I was like, oh yeah, I do!

They also helped me to realise I was looking for someone in all the wrong places, mainly bars and free dating apps instead of paid dating apps, through friends or hobby groups.

I sat down with a pen and paper and literally listed all the men I know or have ever met who seemed nice. There were loads! I was just too busy feeding my belief and focusing on it to notice the truth.

5. “Romance is for other people”

Other people who are better than me; better looking, younger, more successful, better educated, whatever.

It’s so easy to have this inner dialogue going on, especially with social media running in the background of our lives, stuffed full of images of perfect men and women leading ostensibly picture perfect lives.

Yet, those images are more often than not, heavily edited and their lives are just like everyone else’s.

Love is for everyone.

6. “I’ve never been able to get a good relationship going in the past why should it be any different now?”

I understand this completely. And to be frank, it’s a belief that I a still due to work on and replace with another, much nicer belief!

In the past, you may have been a victim of narcissistic abuse, but going forward, you can learn to spot the red flags and avoid them for good.

8. “I’m not worthy of a good relationship / no one will want me”

This simply isn’t true. There really is at least ONE person, if not hundreds or even thousands of compatible people for every one of us.

Women over around 35 will often in particular feel they’re too old to find love. I’m approaching that age and have felt too old in the past but I realised recently that that’s simply ridiculous.

We all know of someone who married later in life and for many women it’s perfectly possible to have children at a later age these days thanks to technological advancements. And if not, that absolutely doesn’t mean that you still can’t have a wonderfully loving partner!

We know that people of ALL ages (literally) meet new partners and form lasting and excellent relationships. We can see that with our parents’ friends, our own friends and many other people who we know.

10. “I can’t be with someone who doesn’t fit my criteria”

The more we think about what we don’t want in a partner, the more likely we are to keep on manifesting what we dislike in people because your thoughts create your reality.

Try letting go of what you really don’t like in partners, such as playing video games too often,

How do limiting beliefs change in relationships?

Beliefs change all the time, not just in relationships. We pick the up like sponges when we hang onto a way of thinking until we believe, without doubt, that it’s the truth.

If you’re already in a committed, longterm relationship and you’d just like to work on making it better, removing limiting beliefs might really help.

Hang around those who are already in fun and fulfilling relationships! You sort of absorb the energy of relationship success via LoA osmosis.

While I clearly can’t guarantee by removing these particularly toxic beliefs you’ll find love, it certainly won’t hurt and it should hugely increase your chances. Remember that the universe is a mirror for your true vibration; and there’s a lot of good and bad stuff that we’re all aligned with. you always manifest what you are, never what you want.

Get out there! Get onto some high quality darting apps and join some new Meetup groups with renewed confidence and enthusiasm.

I know this can take time and it’s a good idea to be fully healed before getting out there again but once you do, you’ll probably find yourself having a really good time and it may just happen when you least expect it – Mr or Ms right may just pop right into your life!