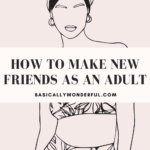 Although this planet has a massive population and we’re all connected via our smartphones and social media accounts, many of us are feeling lonelier than ever before according to quite a few studies over the past decade.

Perhaps this is down to us being busier than ever before with demanding jobs and forever rising home and grocery prices.

It’s also surprisingly easy to NOT be aware of a dwindling social life as growing older usually includes a lot of significant life changes. People move away, or just become too busy with their jobs and families to hang out nearly as much as they used to.

If you feel like it’s time for you to make some new friends, for whatever reason that may be, there are many effective ways to do this, even as an adult. Good friends make life so much more fun so consider trying out some of the suggestions below!

Hopefully, you’ll find that a much richer social life is actually pretty easy to achieve.

Although turning up on your own to a meeting or class chock-full of strangers can be a bit scary, a lot of the people there might not know one another either. So you won’t be the only newcomer.

By far, Meetup events are the easiest, most effortless ways to make new friends. Whatever your hobby is, you’ll find a Meetup group for it. There are groups as esoteric as Medieval reenactments to learning how to do handstands.

And if you don’t already have a hobby, find one! Learn the basics about it online and then dive into a Meetup group where you can learn more about it and make some like-minded new friends at the same time!

You’ll have to be single to try this idea out of course but it’s totally worth a shot.

Sometimes some of the most similarly minded people we could ever meet can come from dating apps. Why? Because we’re usually automatically matched with like-minded souls.

Plenty of people remain friends with those who they’ve dated and even those who have only been on a single date sometimes choose to remain friends in the absence of chemistry because they have quite a lot in common and like one another as people.

There’s an app for literally almost everything these days.

Below are some apps which have been specifically designed for meeting new people nearby including other new moms and dog walkers.

Forums are a great way to make new friends!

Plus there’s a forum for pretty much any topic of conversation, interest, and hobby these days.

If you’re into meditation and yoga, find a forum and start chatting to like minded folk! If you’re a Mom, head over to the super popular forum, mumsnet.com

It might take a while to dive into some meaningful conversations with other forum members but once you do, consider suggest meeting up for a drink to talk more about your shared interests. However lonely we can sometimes feel, and crave the company of a good friend,

There are vast amounts of free Facebook groups to join.

You can also join Facebook groups once you’ve paid for a course. These groups often have members who are super passionate and involved in the group topic and might be more likely to be interested in meeting other people who are equally interested. We all love meeting people who share similar interests!

Take some local classes for anything that interests you. This could include cooking, meditation, running, tennis, pottery, crafting, or painting classes. The amount of classes that are available in busy metropolitan areas is absolutely massive.

You never know who you might meet at a gym. With so many people in and out all day long, you might just suddenly find yourself chatting with someone.

People also tend to socialize quite a lot when winding down after their workouts in the saunas and jacuzzis.

If you already belong to a gym, go to some of the classes they may offer and you’ll probably start chatting with some people.

It’s also pretty tempting to keep the headphones on whenever you’re exercising. While it’s fun to listen to great music when working out, it can cut you off from those around you and massively decrease your chances of striking up a conversation with a potential new friend or partner.

Consider taking them off now and again and see how much more sociable you feel!

Create Your Very Own Meetup Group

It’s highly unlikely that you won’t be able to find some Meetup groups that you’d like to go to as there’s so much choice but if you don’t, just make your own!

You can easily and quickly create a Meetup group and you can even charge people for attending your events.

Book clubs have provided avenues for people to meet for decades. Before the Internet, if you wanted to meet some new people, you’d join a local book club. It was an effective method of making new friends back then which is still effective to this day.

If you’re into a particular genre of music such as 70’s, 80’s or alternative music, there will likely be a nightclub or bar nearby which you could pop down to one evening and make some new friends and listen to your favorite music at the same time.

Hanging out more often with friends and meeting their friends can very quickly create new friendships.

Running a business that will place you in front of people every day will give you limitless opportunities to meet new people and make new friends!

Consider a tuition business (for example, tennis, language, graphic design), or a more traditional business such as a shop, cafe, cleaning company or holistic business.

Find something you’re passionate about such as fitness, spirituality, yoga, or crafts and build a following!

Once you’ve created enough content and you’ve accumulated enough followers, you might want to arrange a tour or events where you can meet your followers and other YouTubers and Instagram influencers.

You’ll undoubtedly network and make a few new friends along while building your new brand.

Start Blogging on a Niche Topic

You very likely have something that you feel truly passionate about – or maybe a few things.

Blogging offers a great way to connect with people online who share hobbies, passions, and interests. Once you’ve built a following, you could arrange to meet your followers and get to know some of them.

If you’re a Christian or you’re thinking of becoming more involved in the religion but don’t belong to a church or maybe you’ve never even been to one before, you might find that most churches have thriving communities within them that you can easily join.

Get a New Job

This might seem a bit drastic, however, we often develop close friendships with work colleagues.

If you’re feeling a little lonely and isolated at work or even if you get on with your colleagues but friendships simply haven’t developed, maybe look for a job with a livelier working atmosphere.

Some offices, particularly start-up companies, have actively sociable, hip and relaxed atmospheres which are very conducive to producing great work and forming friendships at the same time.

Out of Hours School Activities

If you have kids and they attend a school, you might like to become involved with organizing some of their events or helping them out with some administration work.

You’ll meet some fellow parents and you’ll get to know the staff better, which will be good for you and your kids.

A fabulous way to meet new people is to do some volunteering! You could volunteer to work in a charity shop, local hospital, as a charity event organizer and lots more.

Get out More Often

This one may seem annoyingly obvious but by simply going out more often with friends, family and to various events, meetings and classes, you’re far more likely to meet new people who you might find you get along really well with!

This might seem like a really weird way to meet new people, and it is, but it works!

You’re guaranteed to meet lots of new people when you’re working as a driver. Some passengers will probably want to chat while they’re on their way to their destination.

This means that you might just get to know one another a bit better and who knows, that might lead to a friendship developing!

Although you might feel a little shy, intimated or downright scared at the prospect of meeting new people, remember that they may also be feeling the very same way!

After all, people whose lives are already overflowing with friends and social events don’t often have the time nor desire to meet new people.

When you do find new people who you think you might click with, don’t be afraid to enter into some deep conversation. A surface conversation about the weather and so on won’t really make any new friends.

If you feel it’s appropriate and you’ve naturally stumbled into a conversation about topics like politics, psychology or spirituality, dive in! If they’re totally turned off by it then you probably aren’t compatible as friends anyway so there’s no loss!

16 shares
Previous Post: « 12 Fun Things to Do in the Summer with Your Partner
Next Post: Moist Easy Cheesy, Minty Muffins »