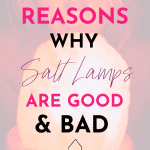 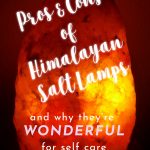 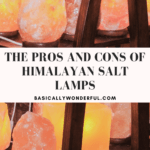 Himalayan salt lamps, whatever shape or size, add an absolutely magical touch to any room.

However, before you buy one, there are some things that you might like to prepare yourself for. Below are some of the pros and cons – as we see them.

If you’re still on the fence about buying any, just look at how gorgeous they are…

Wow, I’ll honestly never forget the first time I placed switched mine on the corner of my desk one evening and switching it on. The glow was otherworldly and I genuinely felt more at ease.

The orange glow looks especially mesmerising in the evenings outdoors on garden tables or indoors in bedroom corners.

The warm orange glow they emit is just SO incredibly comforting and soothing.

Their bases are almost always made from solid wood. Some of the more modern designs might incorporate elements of metal and plastic but most classic Himalayan salt lamps have simple wooden bases.

3. They May Help Your Children Get off to Sleep

These lamps are relaxing for everyone; adults and children alike. The warn and slightly dim orange glow they emit coupled with the natural texture is extremely soothing and pleasant for most people.

4. There Are so Many Designs to Choose From

If you aren’t a fan of the classic shape they come in, you can opt for a lamp in the shape of a sphere, egg, pyramid, cat… The designs available are virtually limitless – and all ultimately have the same health benefits and provide the same beautiful warm orange glow.

This is such a good thing. Negative ions are supposed to counteract the negative effect that positive ions have on our bodies. Negative ions are usually found in abundance in natural materials and outdoors in nature such as in forests, parks, and near waterfalls.

When the lamps have been on for a while and are quite warm, they release negative ions which help to cleanse our surrounding environments and help us to feel more peaceful and balanced.

Remember that the larger the lamp, the more negative ions they will release.

Lighting can be important when trying to create a relaxing atmosphere for your guests. A few large, 7-9kg lamps dotted around a dining room or living room can help to create a soothing ambiance.

There are a few cons to take into consideration, however:

1. They Can Leak Water in Damp Areas

They attract water in the surrounding air and this can cause them to look like they’re leaking water. Pools of water can form underneath them, and we all know that water and electricity are a very bad mix.

To avoid them absorbing large amounts of water, keep them in dry rooms and avoid bathrooms and kitchens.

2. Watch Out for Splinters from Their Wooden Bases

This may sound like an odd point, but it can happen as it’s possible to get a splinter from any wooden surface. The bases are usually sanded and therefore safe but look out for any damaged areas that your children or pets could get splinters from, especially after they’ve been dropped.

3. There Are Tonnes of Fakes on the Market

Yup. At the moment, there are loads of faked out there!

It’s unfortunate and sincerely disheartening to know that some folk are just fine with selling fakes but they still exist so look out for them.

Well, OK, Diana but how do you actually spot a fake Himalayan salt lamp?

The truth is that this can be pretty tricky, but if they look almost perfect and NOT like they’ve been chiseled off a larger lump of salt, they might not be real. They will also never sweat as fake Himalayan salt lamps are usually made from table salt, which simply doesn’t attract and absorb water as Himalayan salt does.

This is something to look out for as you obviously won’t receive any of the purported health benefits if your lamp is made from table salt or some other kind of processed material/s.

4. They Can Be a Little Costly to Run

They usually take oven bulbs and these aren’t energy saving. The more lamps you have, the more bulbs you’ll

5. They Can Break Quite Easily

Despite seeming fairly robust being remarkably heavy, the lamps, especially when wet, can break. Some buyers have left reviews online saying upon unpacking their lamps they have found them broken into two or more pieces.

They’re super heavy and break super easily so be very careful when tipping them on the side to do this.

There’s another little drawback too — they usually use oven light bulbs and they just don’t seem to last that long. The one that came with my first ever salt lamp perished after a mere two months of infrequent use!

Plus, many hardware and DIY stores don’t seem to stock oven bulbs in store (kind of surprisingly, right?!) so you’ll probably have to buy your replacements online.

Or pretty much any animal that likes to lick stuff!

This is a big one and possibly the main reason many pet owners decide against buying Himalayan salt lamps. But here’s the thing, they’re only toxic if your pet actually licks the salt (obviously!).

Most pets probably won’t but this will depend on the personality and preferences of your furry buddy; some will, some won’t. And there’s no firm way of telling until you buy one, set it up and watch how they react to it BUT even then, you can’t watch them all the time.

I know that my cat is extremely unlikely to ever give my salt lamp a good licking because I’ve had several around my home for years and she’s never shown an ounce of interest in any of them.

It’s good to see that there’s quite a high search volume for ‘Himalayan lamps and cats’. Yes, the glow can be soothing and comforting. Yes, they’re inexpensive and wonderfully decorative pieces for the home but if they stand to harm your cat or other pet in any way, it’s good to know the risks.

Salt isn’t toxic to cats in tiny doses so if your cat does lick your lamp once, they should be okay. However, more than that might prove very unsafe.

Consider placing the lamp well out of your pets’ reach and so you can still enjoy the soft glow effortlessly.

Some people seem to think the lamps radiate some kind of toxic scent or particles and on this matter, I can assure you that’s absolutely not the case! There is simply potential for the animal to overdose on sodium chloride (salt) if your pet licks your lamp often enough.

8. And Now for Something a Bit Gross…

When unpacking your lamp, keep a lookout for any bugs (including cockroaches!) that might be lingering within the packaging or inside the lamp.

Yes, you read that correctly. I’m sorry — I get that was totally gross but it even happened to me with my first lamp, so it’s just a heads up.

A few Amazon reviewers have stated that they’ve been a little surprised to find some unexpected guests in their deliveries!

Hopefully, this article has helped you to decide whether you’d like to go ahead and buy a Himalayan salt lamp.

One of the main pros is the sheer natural beauty of the lamps and the natural and hugely soothing element they can quickly and easily add to any space at all within the home.

11 shares
Previous Post: « 6 Reasons Why Blue Sodalite Should Be In Your Life
Next Post: 12 Fun Things to Do in the Summer with Your Partner »