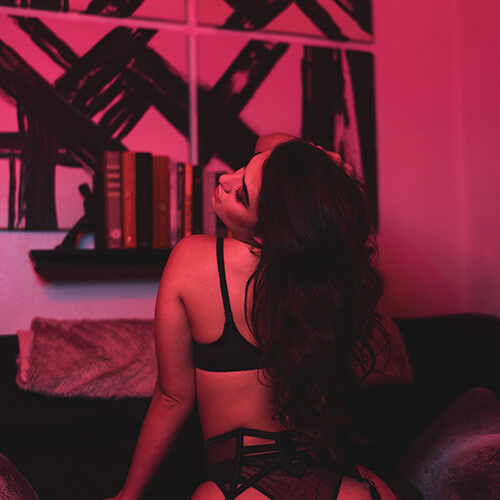 What a Moon in Scorpio Woman Is Like Between the Sheets

The Scorpio Moon woman in bed is like a firecracker; explosive, hot, intense and deliciously experimental and unpredictable.

No one could ever accuse a woman with this moon sign of being dull, mediocre or so-so in the sack.

Trust me, you won’t be disappointed. But you will be left hankering for more… and more.

Scorpio is an energy that is all about extreme emotion. She can be so passionate and intense in bed that her energy can be all-consuming once you’re bonding with her in the most intimate of ways.

You’ll never be able to forget your sexual encounters with her.

In the best of ways.

With her, sex is a meeting of the mind, body, and Soul.

It’s sacred to her. She completely understands that it’s a blending of two people’s energies on every level; that it’s a powerful ritualistic practice that is so potent, it has the potential to create new life.

She’s able to understand your sexual desires and needs like no one else. She’s exceptionally intuitive, if not all-out psychic, and she’ll just sense your preferences and what works for you.

Casual dating is not for her

She’s so sensitive that in all likelihood, she just won’t be able to she’ll either never speak to you ever again as long as she lives afterward or she’ll have to kill you to ensure you don’t relay any juicy details about her to your friends.

She won’t let you into her bed easily

So we’ve established that she’s great in bed and I’m sure that I’ve sharpened your desire for her but here’s the thing — getting her into bed in the first place is going to be challenging.

She won’t sleep with just anyone and you’ll have to earn her complete trust, loyalty and heart over before anything can happen.

There will also have to be something special about you. If there’s something that sets you apart from everyone else such as exceptional intuition, kindness, loyalty, sincerity or sweetness, that will help.

Taboos and the occult

You know those intense, wild sex scenes in movies that most people think are just totally unrealistic in reality? Well, they’re pretty realistic and average to her.

This moon sign gets freaky in (and out) of the bedroom. It’s strongly associated with the occult and the exploration of taboos and kinks.

Kinks and fetishes may be pretty standard for her. Yes, we’re talking about whips, chains, feathers, rubber, latex, whatever…

She’ll probably want to try it all — and then some more.

This sign is also into control and domination so she’ll either enjoy dominating or being dominate — or maybe both.

She can see through you

Not literally, of course. As cool as that would be, what I mean is that her intuition is so strong that she can see who you really are, what your intentions are, and what you’re really all about merely by observing you.

The most psychic women with this sign can see through clean through people, straight into the very depths of their Souls.

So don’t insult her intelligence and intuitive ability by pretending you’re anything that you’re not.

Sure she’s passionate and loves sex but she might seem somewhat apprehensive about interacting with people she doesn’t know very well. When first getting to know someone, her demeanor may seem a little withdrawn.

She’s acting this way because she’s cautious about who she interacts with. She’s very sensitive and needs to identify, from a safe distance, who has good energy before she can allow them to get closer to her.

She won’t mess with people she doesn’t like. If she deems someone untrustworthy or shallow, they won’t be relevant and if she can, she’ll ignore them completely.

Sometimes, you can spot a woman with this placement just by paying attention to the way she tentatively checks others out and observes them from a distance.

What she finds attractive

Remember that she needs to connect with her partner on every level; physically, emotionally, mentally, and spiritually.

Really, the full package works best for her and in reality, few people posses that.

She needs a partner who will make her look good and will represent her well. She views her partner as an extension of herself because she bonds with them on every level.

If you’ve got a good job and you’re earning a decent income, she’ll find that very attractive. She enjoys the finer things in life and wants to share that with a partner who is excelling in life. She needs to ensure that you can handle your own life and finances.

If you have your own stuff going on, that’ll really work for her. Those who are clingy, needy, insecure, and uncertain about themselves won’t work for her.

Shallow people won’t get past date number two with her.

You can be an emotional person but if you dislike forming deep and consistent connections, she’ll steer clear of you.

And she doesn’t share. She is very possessive and can be extremely jealous.

If you’re the type of person who feels suffocated in relationships or gets bored easily or enjoys sleeping with multiple partners, she won’t be a good choice for you.

Just like the Leo moons, she’s seriously loyal and trustworthy and she’ll expect the same from you.

The details of your sexual relationship with her will stay with her until death. She will literally take the details of her time in bed with you to her grave.

While others might jump at the chance to divulge intimate details of their sex lives, she’s exceptionally trustworthy and understands how humiliating to talk about what their partner is like, sexually. Especially behind their back.

It would make her feel exposed and betrayed if someone did that to her, so she won’t do it to you.

Like women with Aries moons, this sign is all about extreme emotions and that means extreme experiences. Conservative types aren’t compatible with her.

She adores her family and forms strong, close bonds with genuine friends. Her partner will have to show those closest to her the same level of appreciation, respect and care.

Those who don’t make an effort with her special people won’t go very far with her.

And honestly, I’ll save you the hassle; don’t bother trying to fool her by pretending to be genuinely kind, caring or interested in her because she’s also a human lie detector and can smell BS miles off.

If she even gets as much of a whiff of insincerity and manipulation, she’ll vanish. You’ll be promptly cut out of her life with exactly zero second chances.

Her biggest turn-offs and deal-breakers

If you really want a relationship with a woman with this lunar placement, you’ll do very well to know from the get go what she loves and hates in a partner.

Aside from the pretty common things that women (and men) find unattractive in people like poor personal hygiene and coffee breath, this woman finds these particular traits massive turn-offs and deal-breakers:

She carries herself well, dresses well and makes sure her hair and make-up are always on-point before heading out of the house.

And she expects the same from her partner. That’s a HUGE turn-on for her.

If you know yourself well, hold yourself well, look good, have your life together and aren’t afraid to speak your mind, you’ll get her attention for sure.

But remember: it has all got to be genuine! She’ll psychically know if it isn’t.

If you talk too much, you aren’t getting to know her and you aren’t allowing her to express herself. She’s not interested in self-absorbed people; she won’t be able to form a meaningful connection with them.

She loathes having her boundaries pushed. If she says she doesn’t like doing something, you better take heed. Disrespect is a quick and permanent deal-breaker for her.

She can’t stand people who aren’t genuine, truthful, sincere and own their true selves.

In any way. It just won’t be tolerated. This is a woman who is sensitive and has most likely experienced deep traumas and wounds and has zero patience for BS.

If she feels someone’s messing with her, she’ll want to detach from them to put an end to any heartache and she won’t be back to endure more abuse.

She knows her worth.

6. Being rude to others

Those people who insult staff in stores and restaurants?

Nah, she won’t put up with the kind of behaviour. That’s would be an instant deal-breaker for her.

She’s naturally empathic and would hate to be treated poorly so she expects her partner to follow suit and treat others with courtesy at all times.

7. Being pre-occupied and self-focused

This sign is very authentic and wants to meld mind, body and Soul with her partner. That’s basically impossible to do with someone whose mind is always elsewhere or who is self-obsessed.

“I’ll never apologize for speaking my mind so either take it or leave it.”

Oh, and did I also mention that you have to be stellar at sex? Yup — a real pro. Please don’t think that just because you can get her into bed that a mediocre wham bam, thank you, Ma’am, will ever do. It most certainly won’t.

She’ll expect you to be on her level and that means being an exceptionally good kisser and a generous lover who knows how to please — all night long.

Okay, we have to talk about her eyes…

You’ll just know that you’re going to be in for an amazing night when she gives you those super intense come-to-bed eyes.

When she gives you that look, you just know that you’re going to be in for a really wild — and long, night.

Oftentimes, you can spot a woman with this astrological placement merely by the way she looks at you. She might even stare you down because she can hold her intense gaze until you feel too uncomfortable to keep on looking back at her.

Whatever color her eyes are, they’ll be probing and the color will be deep.

The bottom line is that if you want to have a sexual relationship with her, it’ll be in the context of a long-term relationship due to her super emotional nature.

To recap: you’ve got to be exciting if you want to keep her. Exchanging dull platitudes over a pizza and a pint most date nights will undoubtedly bore her into the ground.

She needs plenty of mental, emotional, and physical stimulation. Her partner will have to have tons of personality and radiate good vibes. They’ll have to be independent, hard-working, self-assured, and intelligent.

Does that all sound exhausting? You bet. But it’s how her cookie crumbles.

Finally, remember that what makes her so great in bed is her deep desire to connect with her partner on a profound level, however, that can only take place once they have gained her complete trust, respect, and love.

Of course, that can take time and energy but I promise that it’ll be so worth the wait.

Hi, I’m Diana. If you’d like to learn more about yourself and others through Astrology or you’re wondering how to manifest better or what a repeating number means, you’re in the right place!