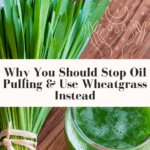 Yes, it appears to whiten my teeth somewhat, yes it seems to have powerful anti-bacterial properties, and yes, my mouth does feel slightly cleaner and fresher after using it each morning.

I’m still not a big fan.

And it’s not so much that high quality coconut oil is fairly expensive to buy, or that it’s pretty gross to put in your mouth first thing in the morning, it’s that it takes a whole 15 minutes to do its thang!

And that in my book is a huge no-no.

I usually lay everything out the night before for the day ahead and even then, I very rarely have 15 minutes available to spend on swishing oil around in my mouth.

I came across a few people online recommending using wheatgrass powder in place of coconut oil and it piqued my interest. At first, I thought, “eh, oil pulling is a bit annoying, but it works, so why would I go for the unknown?”.

Well, I gave it whirl and since that whirl, I haven’t stopped using it.

Here’s why I love rinsing with Wheatgrass powder instead of oil pulling with coconut oil, or any other oil for that matter, and how you can use it too (if you fancy that one day!):

Oils can really harm your plumbing. People who oil pull have reported on online forums and in blog comments that they accidentally blocked up their basins and even toilets with coconut oil because they didn’t know that they should have been spitting it into their trashcans or outside onto the dirt.

Wheatgrass can just go straight down your basin etc without causing any short or longterm plumbing issues.

I’ve done this many times in the past as I used to oil pull every day and it was really nasty.

Accidentally swallowing coconut oil should be totally fine too (I didn’t have any adverse effects when it happened to me) but as someone who has accidentally swallowed both, it’s far grosser in my personal opinion, that swallowing the wheatgrass you’ve just had a quick rinse with.

There’s no denying, however, that the coconut oil contains a lot more sugar than the wheatgrass rinse and that may not be okay for those who have diabetes.

3. It’s Just as Effective at Healing Sores as Coconut Oil

I ran a few searches on Google and I couldn’t really find any conclusive evidence proving that either one was better than the other at healing sores, ulcers, or cuts in the mouth.

From the anecdotal evidence I saw posted by people in forums and underneath Youtube videos, both seem to be pretty effective.

4. Rinsing with Wheatgrass Is so Much Faster

Rinsing with wheatgrass also takes just 3-5 minutes of your morning schedule in comparison to the 15 minutes needed to oil pull.

Additionally, you can us it before you brush your teeth, or you can use it afterward.

5. Solid Coconut Oil is Unpleasant to Put in Your Mouth

As I mentioned earlier, a big scoop of coconut oil in your mouth first thing in the morning isn’t very tasty. It can even make some people gag.

The taste of wheatgrass powder mixed with water isn’t that great either, but actually getting it into your mouth is far easier — at least in my opinion. And the texture is way more tolerable than the thick and slimy consistency of coconut oil.

And one small jar of it may only last up to a month because the amount you need to use is each day is pretty substantial. Whereas one bag of wheatgrass powder can last for months on end with daily use.

7. Wheatgrass May Help with Sinus Issues or Earache

Again, as above, most of the evidence seems to be anecdotal but hey, why not give it a shot?

You might also find it be a wonderful, all-natural, healthy pain reducer.

Wheatgrass contains chlorophyll which is antibacterial and I’ve definitely noticed that it’s helped to eliminate the slightly bad breath I had. Combine rinsing with wheatgrass and flossing on a daily basis (if you don’t already do that) and your breath should smell perfectly fresh.

Even when I was oil pulling, I still noticed that by the afternoon, there was a distinct tinge of odor coming from my mouth (sorry – oversharing, I know). But rinsing with wheatgrass took care of that and that was honestly quite a pleasant surprise as I really wasn’t expecting it.

As a side-note, if the quality of your tap water isn’t great, consider using bottled water to rinse with instead. You’ll only be using a very small amount each day so it’ll be economical to use.

10. It Can Help Soothe Herpes Infections

Some people suffer from herpes simplex infections inside the mouth.

Although the severity and frequency of infections have been proven to fade over time, those who have been recently infected may find a sore now and again when they’re tired, run down, slightly anemic, or are fighting off a cold or the ‘flu.

Rinsing with wheatgrass may provide a totally natural way of tackling the sores. Cocont oil should be avoided if and when a sore pops up as it’s high in arginine which can increase the amount or severity of the sores.

How to Use It

Mix around half a teaspoon of wheatgrass powder into a very small glass (or preferably a shot glass) containing water.

Swirl it around a little and rinse with it for just 3-5 minutes before emptying it into your basin.

Hopefully you found this quick tip post helpful. Let me know your thoughts in the comments below and if you actually start using wheatgrass instead of coconut oil, I’d love to hear how you get on with it!

11 shares
Previous Post: « Why Am I So Drawn to Rose Quartz?
Next Post: The Esoteric Benefits of Clear Quartz »